Mühle am Wall – Mill at the city ramparts

Today we post a short video of one of the landmarks of our home town, Bremen (Germany). This mill is called Mühle am Wall, or mill at the city ramparts, and it’s probably the most photographed subject in Bremen. Or maybe that’s the statue of the Bremer Stadtmusikanten or Bremen town musicians. We’re not sure.

A small history of Bremen

Bremen is situated in the north of Germany and has a long history. We will keep it short for you and mention a few highlights.

The Bremer Wallanlagen, the old city fortifications and today an idyllic park with lovely water, was once an arms bastion. In 1803, the transformation of the then military meaningless long wall began, and it turned into a “green ring” around the historic old town. Since 1976, the ramparts stand under the protection of historical monuments.

A total of five windmills from the 17th and 18th century have been preserved in Bremen to this day. One of them is the mill Mühle am Wall in the middle of the ramparts. Although it burned down twice in the 19th century, it was rebuilt again and again. Until 1947 flour was still ground here, today there is a lovely café in the mill. Here you can take a coffee break after a stroll through the city or a walk through the adjacent ramparts. Oh, and sunday breakfast at this place is highly recommended! 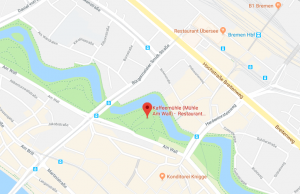